How to Play Hopscotch: Classic Rules & Some Fun Variations

Although technological devices are the entertainment staples of today’s youth, when the days are pretty and the temperature’s nice, kids, especially younger ones, still enjoy going outside and having some fun in the sun. On these days, it seems to be the simpler games that draw their attention most.

Hopscotch is one of those classics that’s managed to remain popular despite the world’s growing obsession with technology, but not everyone knows how to play.

Don’t worry. We’ve got you covered.

What You’ll Need to Play

One of the best things about hopscotch is that it requires very little in the way of equipment. All you’ll need is something with which to make your hopscotch grid (or board, if you prefer).

Most people use chalk, but masking tape or washable paints can work as well. If you’re at the beach, you can even draw your grid in the sand. If you want to play Hopscotch indoors you could even buy something like this cute hopscotch rug from my favorite toy maker, Melissa and Doug. 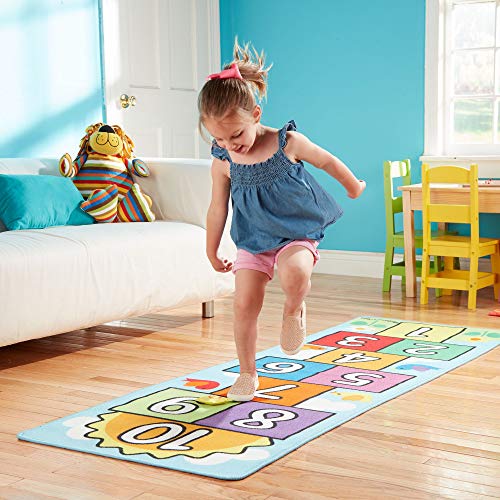 Prices pulled from the Amazon Product Advertising API on:

Product prices and availability are accurate as of the date/time indicated and are subject to change. Any price and availability information displayed on [relevant Amazon Site(s), as applicable] at the time of purchase will apply to the purchase of this product.

Then you’ll need a marker for each person playing the game. Your marker can be anything that’s small, light and easy to toss.

Most people use small stones, but other things work as well, such as bottle caps, buttons, small beanbags, cheap rings or bracelets or anything else that’s small and doesn’t bounce or roll too much. There are plenty of options.

In a pinch, you can even use one single marker, passing it between players during their turns.

How Do You Play Traditional Hopscotch?

“Traditional” hopscotch is played on the normal grid you most often see in pictures or media. It’s more or less a straight line of squares with double squares (side-by-side squares) thrown in occasionally for an extra challenge.

Step 1: Gather Your Supplies and Players

Step one is simple enough. Round up your friends who want to play and grab your chosen markers and the chalk/tape/etc.

Step 2: Draw Your Hopscotch Board on the Ground

Find a flat, even spot on the ground. Concrete, asphalt or cement usually work best. Then draw your hopscotch grid.

You can make your grid as large as you like, but traditionally, there are usually eight to ten squares. Each individual square needs to be large enough so that the markers don’t slide or bounce out easily and so that the foot of the largest person playing can fit easily within it.

Most of the time, the “safe” or “rest” spot is drawn at the very end of the grid, and it’s larger than the other squares.

This is where players can set both feet down, regain their balance and turn around to start back again. In larger grids, multiple rest/safe spots can be peppered in throughout it; just make sure you make it large enough and label it clearly so that players know it’s a two-foot safe spot.

After the grid is drawn, determine which player will hop first. The first player tosses her marker into the first square.

The marker must remain inside the square without sliding or bouncing out or moving into another square. If it doesn’t, that player loses her turn, and the next player will toss his marker onto the grid.

The first player who gets his or her stone into square one will then get ready to hop.

In rows with single squares, the player may only hop on one foot; however, if a player hops into a double-square row, she must place both feet on the ground simultaneously – one in each square in the row.

The only exceptions are the safe spaces, which are large enough to accommodate both feet in one square.

If she puts two feet down in a single-square row, skips a square or steps on a line rather than inside the square, she loses her turn, and the next player gets a chance to throw his marker and attempt to hop the grid.

Step 5: Turn around and Hop Back, Retrieving Your Marker

When the player gets to the last square in the grid, he’ll turn around and hop back the way he came.

Once he reaches the square immediately in front of where his marker is lying, he must bend down and retrieve it.

Again, this must be done on only one foot if the square preceding the marker is a single-square spot. After retrieving his marker, he’ll again skip that square and finish the grid, successfully having completed round one.

The next player will then toss his or her marker. If this is a new player, she’ll toss her marker into the first square.

Step 7: Repeat, Tossing the Marker to the Next Highest Square Each Turn

Once all players have had a turn, the game continues with the first player starting her next turn by tossing her marker again.

If players successfully completed round one, they’ll now toss their markers into the second square and play the game, skipping over square two on their forward and return trips.

Players who lost their turns during round one will have to toss their markers back into square one and try again.

The winner of the game is the person who can successfully toss his or her marker into every square sequentially and hop the grid successfully each time.

In other words, the first person who gets to round eight (or ten or whatever the final grid number is) tosses the marker successfully into square eight and then hops successfully through the grid and back again wins.

The above-listed grid formation is the most common way to play hopscotch. If you want to make it more challenging, you can add in more squares and make the game much longer.

There have even been traditional hopscotch games that spanned entire city blocks! There are a few common variations on the classic game, though.

Instead of making the semi-straight line grid, draw your hopscotch squares in a circular or shaped pattern instead. The game is played in largely the same way, but the twists and turns add a little extra challenge and excitement.

Whatever type of grid you want to make, you can make the game even more fun by adding a timer. You can set the timer for a certain amount of time, and all players must finish their forward and return journeys within that time limit, or you can simply time every player to see who finishes fastest.

If you go with the former option, you can even lessen the time every round to make it a little more difficult to complete each time.

Some people play a version of hopscotch in which the squares are “crazy squares” that mean different things.

For instance, some squares might be tiny, in which case players must stand on their tippy-toes in them. Others might have x’s drawn in them. For those squares, players might have to perform a certain task (a double jump, clap three times, a circle jump or shouting out a certain word) when they land on it.

The game ends when all squares have been signed, and the player with the most signed squares wins.

The Benefits of Hopscotch – What Kids Learn

There are plenty of great physical, mental and social benefits kids can learn from playing hopscotch.

Playing hopscotch outside provides many of the same benefits as any other outdoor game. Kids get vitamin D from the sun and have a chance to breathe some fresh air. The hopping and jumping gives them plenty of exercise and helps burn calories, strengthen their muscles and improve their balance and coordination.

Anything that keeps kids active and moving is a good thing!

Mental, Social and Other Benefits

Although it can be played alone, hopscotch is generally a social activity. It’s a way for children to have healthy, competitive interactions with other children. It teaches them patience and good sportsmanship.

They learn about the importance of taking turns, encouraging one another and being good losers and humble winners. Plus, for very young children, it can be a great way to help them learn their numbers and how to count.

How to Play Hopscotch – Step By Step Rules

How many people can play Hopscotch?

Hopscotch can be played by as many people as you want! There are no maximum or minimum limits on the number of players.

What’s the object of the Hopscotch game?

The object of hopscotch is different depending on whether you’re playing traditional hopscotch or another variation of the game. Traditionally, the object of the game is to be the first player to successfully hop the grid however many times it takes to win. (This number corresponds with the number of squares in the grid.)

How long does a game of Hopscotch usually last?

Just as there are no set number of players who can play the game, there’s also no set time limit for the game. Just remember that the more players you have, the longer the game is likely to be. If games run too long, though, you can always quit early and pick it up again the next day. The fastest game of hopscotch ever played was completed by Ashrita Furman, who holds the Guinness Book of World Records record for fastest hopscotch game. She finished in one minute and eight seconds.

Where are the best places to play Hopscotch?

Any hard, flat surface can be used to play hopscotch. You can even make boards in the sand at the beach. Many playgrounds even have built-in hopscotch grids. It’s a very versatile game. You can pretty much play it anywhere you can draw a grid.

The origins of the game are pretty unclear. The first recorded mentions of the game seem to be in the 1600’s, but there are rumors that Roman soldiers played the game far earlier than that as a way to train for battle. Others argue that the Chinese played it first. 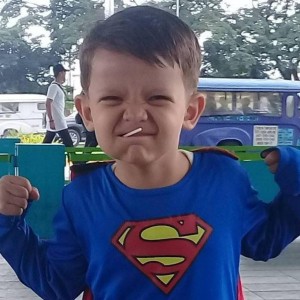